I went on a food tour this weekend that was entirely out of order. You see, we started the tour with what really should have been the grand finale. “Bull City Brewery” had a fantastic hamburger and pickle chips, but what it really was selling was a sense of meaning. The proprietor told us all about the moral, environmental, and health dangers of conventional meat. The solution, as he described it, was to eat at Bull City Brewery. Indeed, he said that this restaurant is a B-corp, that is, a corporation that officially enshrines environmental and community impact as additional bottom lines alongside profit. It is one of only sixteen B-Corp restaurants in the world. The owner exhorted us to switch to completely pasture-raised meat. By eating at Bull City Brewery and its sister restaurant Pompieri Pizza, we were saving the world.

The problem with this is that when I went to Pizzeria Toro I expected to be similarly inspired. Instead, well, honestly I could barely hear the speech because no effort was made to give us a separate space from the noise of the main restaurant. Mostly it seemed to be about the history of the building and the ever-changing menu. I heard not one mention of how I personally was a hero by eating this pizza.

Very disappointing. In Alley Twenty-Six, I learned about the suffering caused by the gin craze in the first half of the eighteenth century in Great Britain (our craft cocktails were neither helping nor hurting that cause).

Our octopus hush puppies at Dashi  did not prompt us to briefly transform into a force for good. 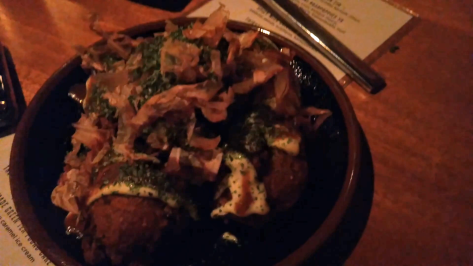 Our fresh local catfish and succotash at The Piedmont offered no redemption for our personal sins.

The take-home question is this: When will all restaurants be able to make sure that my dining experience is a reason for humanity to celebrate?

As much as it pains me to do so, wiser people than me have encouraged me to let my readers know when I do not intend to be taken seriously. This is one of those instances. In fact, I do not expect every restaurant I go to to tell me I’m a wonderful human being just for eating there. I do think B-Corps are a good thing, however. Now that I know they exist, I intend to patronize more of them. They include King Arthur Flour, Ben & Jerry’s, Seventh Generation, Etsy and an ever-growing list of other companies.

I don’t know how many of you have seen “Grand Theft Auto Pacifist.” Probably very few. It is a short video series about a man who attempts to play grand theft auto five online while adhering to the law and moral values in general. Needless to say, the structure of the game itself makes it very difficult to live nonviolently and within the law, and the narrator spends a lot of time hilariously musing over the philosophical implications of this world.

I would like to start by saying that when I started playing Dungeons & Dragons with my friends, I never expected to create a pacifist character. For one thing, even if I want to take that challenge myself it would be too much to ask of my fellow players. When one player said that he was going to be a conservative Pelorite, though, Pelor being a deity within the game, I thought I would be a liberal Pelorite. Particularly, I would be a universalist who believes that everyone gets to go to Pelor’s heaven.

Of course, since violence is built into the game, I had to have some modifications to typical universalism. Particularly, my character Zacchariah Holbrech developed a sense that murder and violence were simply sending people to the heaven where everyone eventually goes.

My father played with us, too, and inspired by the Pelorite devotion brewing in the party, he developed another Pelorite, one who actually was disinterested in violence. I think if given his way, he might have happily stayed at the Abbey and simply stopped playing with us once we went off on our adventure. Sometimes his character “Tom the Monk” will complain that really he just wants to bind books and that’s what he’s good at, not fighting. He fights anyway.

Zach is very comfortable with fighting, but for a while he tried to maintain a level of decorum. As a lawful good character, when he promised a captured bugbear that he would not have him executed in return for information, he was horrified to learn that overnight one of his non-Pelorite party-members smashed the tied up bugbear’s head in.

After some increasingly game-interrupting attempts at getting the party to agree not to kill captives that they had promised not to kill, Zach received a message from “Pelor himself” (AKA  the gamemaster – the guy that creates the whole scenario and tries to make sure everyone’s having a good time) that really keeping your word to evil monsters is not very important. As long as evil is slain, Pelor is happy, said Pelor. Zach took this message to heart, but when it came to a poor, mistreated goblin locked in a dungeon not in any position to hurt anyone, he couldn’t do it. Instead, he shouted and shouted about how he was going to kill this goblin until another party member mercifully relieved him of his Peloric duty. Eventually somebody who knew Goblin language talked to the goblin until the goblin said he believed in them (the party members). Then another party member made the theological argument that the goblin was therefore a Pelorite by extension.

It’s difficult to play any kind of character with whom I could remotely identify in this world constantly at war between two irreconcilable forces of “good” and “evil.” For example, continuing the fantasy tradition of writing that sounds like war propaganda, The description of the bugbear includes this passage, “when a bugbear holds its blade, it kills only when it can be assured that the murder will cause maximum pain and suffering to those its weapon does not touch; to a bugbear, the true goal of murder is to strike not at the victim, but at those who held the victim dear.”

This is, after all appropriate for a creature whose alignment, as defined by the game, is not to a particular faction or cause so much as just to evil. This notion of absolute evil makes the idea of everyone going to heaven a little confusing.

Nevertheless, despite his intelligence of only 10 (no better than average!), Zacchariah is pretty good at making theology work for him; he now takes a Rawlsian perspective. The bugbear did not choose to be a bugbear and therefore naturally inclined to hurt people. Taking a theological interpretation of John Rawls, although the bugbear’s actions are evil, when it loses its body the brain chemistry that gave it such pleasure at others’ pain is lost with it, and the soul that goes to Almighty Lord Pelor is pure. Thus, it is a kindness to kill evil creatures. I think  I’m just going to have to accept that Zacchariah is a straight up religious extremist like most of my party. Thank goodness this is just a game.