Over the weekend I have not had a moment to offer an update. I have been out and about in Connecticut and New York City packing my days with activities. Now I’m in Bermuda and things have slowed down to the point that I can take a little time to report. I have marked statements not meant to be taken as literal fact with “*”.

A visit to NYC is not complete without a stop in Ridgefield Connecticut to visit my old college roommate, Greg. COVER ART: A somewhat menacing woven tapestry of swans in the Aldrige Museum of Modern Art in Ridgefield.

Carl Jung’s “The Red Book” gives readers a friendly introduction to the realms of madness of which men do not speak*.

In NYC we visited the Metropolitan Museum of Art. 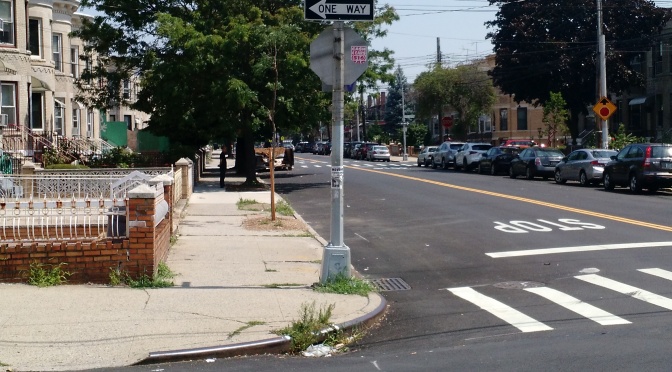 Connecticut is not pronounced like it is spelled. How to properly pronounce Connecticut: “Kan-ehkt-ee-koot.” Practice this pronunciation and you will fit right in with the Kanehkteekootans.

If you are in Connecticut, let me answer your first question: you can get to New York City via the North Metro Train. After wandering around Manhattan, Alice and I had a second goal: take a tour of Sam’s infancy and early toddlerhood.

As it turns out my parents’ life in Brooklyn is scattered around New York. This makes it difficult to arrange into a tour. Thus, I had to focus on the essentials. I took the subway to Brooklyn with two goals in mind: find little Sam’s park in Benson-Hurst , and eat New York pizza.

After Central Park in Manhattan, I figured the concrete playgrounds my dad described during my early years had probably themselves become green as well. As it turns out, Brooklyn is different from Manhattan. Satellite park, now named after “Lieutenant Joseph Petrosino,” remained as hard and flat as he had claimed. Like other places in New York, it had a sprinkler system that seemed to constantly shoot water out for the amusement of children. One child drew water into an enormous plastic syringe that he then emptied on top of his brother’s head. We started North.

As we walked down 16th street in Brooklyn, we began to see a Hasidic Jew here and there.  As we walked, the Hasidic Jews appeared more and more often until they consisted of most of the people we saw. Walking for miles we found very little besides bake shops. Certainly no New York style pizza. It was not until after a very long walk that we found “Rocky’s pizza”

My father had forbade me to get toppings on my New York Pizza. He declared that I would understand once I had had the proper experience getting grease on myself. “You will never forgive yourself,” he said, “if artichoke falls on your arm instead of hot grease”.

Alice and I ended up with two slices of cheese pizza, and one slice of Buffalo chicken. True to my father’s promise, the cheese was superior. In the end no grease ended up on my arm.

Initially we had some trouble finding the subway entrance to get us back to Grand Central Terminal. I stopped to speak to a native New Yorker, who looked at me with surprise and mischief, but instantly changed her expression to one more benign. I briefly feared her directions would only make us more lost, but evidently she had decided to be nice instead of mean, since we were soon at the subway and on our way home.